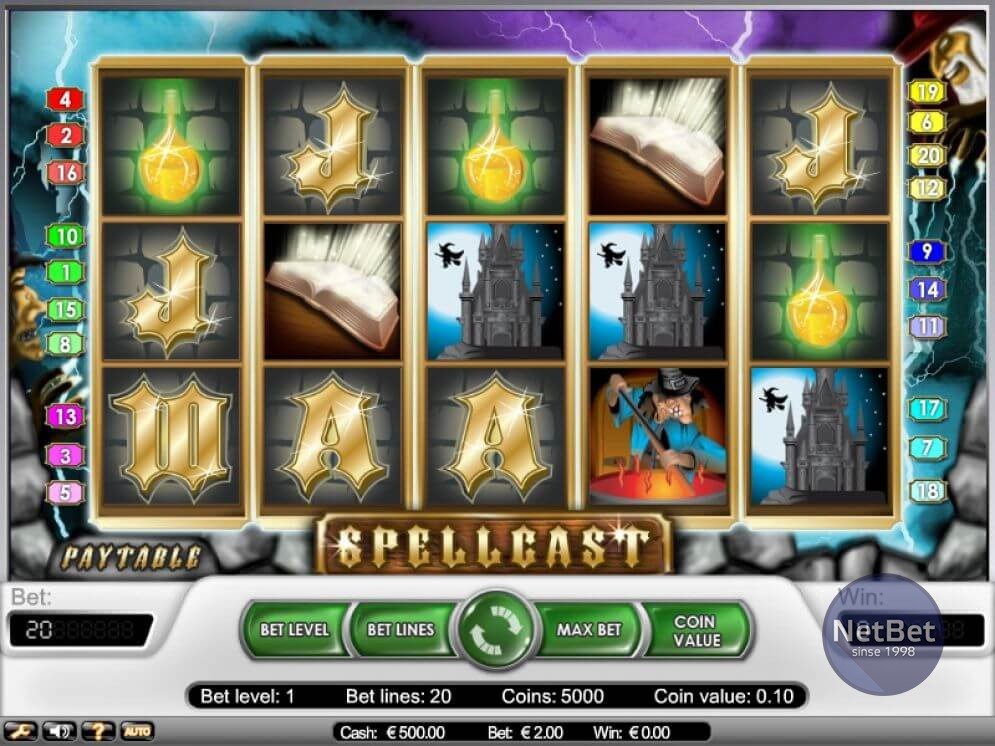 Spellcast is a magical game set in the land of mystery, magic, and enchantment. A classic video slot from NetEnt, this wicked little game delivers top notch entertainment with a variety of betting options, playing modes, and bountiful Free Spins. “Sometimes I watch two girls cast a spell, and then I cast a spell myself” said Xander, a character from the legendary Buffy The Vampire Slayer series we watched religiously when we were kids. In the same fashion, this game immerses you into the atmosphere of everything inexplicably magical and fantastically fun for no tangible reason. Not the most famous of all slots amongst gamblers, but with some potential.

The game comes with the usual set of features (below), among which are Max Bet, Autoplay, and coin value adjustment, plus a decent base game, in our estimation. The base game can net you a few good wins that have the potential of turning into grand wins should a few more wilds turn up. Free Spins are not bad, too, with 3X multiplier, , but there are long dry spells, which we don’t particularly like. There are a few okay wins here, but nothing grandiose. Nothing too exciting about the paytable and the wagering requirements, like we’ve seen, for example, in Piggy Riches online slot. We think, however, that with a little work this slot could really pick up.

The payouts are nice, but not legendary (if we take average wins), which will highly likely be the reason most players will soon move on to other slots, which are legendary. Graphics, we definitively say, are also average, because this game is kind of dated – and untouched, by the looks of it, since medieval times. Maybe if you’re a fan of the magical genre…Just make sure though, that if you are, that you make a tasteful selection.

Overall this game kind of feels like working on Internet Explorer: you keep waiting for it to come around (and you know it will at some point), but soon you start thinking there’s something high-tech, sleek, fast and powerful like Chrome, or something with a free VPN like Opera, or something intriguing and secretive like Tor, so, soon, you move on because, the truth is, this slot is kind of vague (although we’ve seen a lot worse, and this one isn’t a clearly bad one). Better yet, this game is kind of like one of those supporting-actor-good-guys sidekicks in Hollywood action movies that die in the movies taking a bullet for the protagonist. You know they’ve got to go, but you still kind of feel bad for them.

Nice overall base game, but it just feels like it could pay better for a 20-payline slot. It kind of resembles other games we’ve seen lately, so, we think, a few original ideas never go amiss. This slot could be good with an interesting bonus game feature, or just smaller but more regular wins. There are good wins here, time after time, but we think, going on our previous experience, that most people, if they are anything like us, will go bored out of their minds just waiting for them (and they happen once in a blue moon). Hitting 5 Wilds is almost impossible, and awarding such a low amount of coins for such a nearly impossible event is also kind of steep, because in other slot by getting 5 Wilds you could probably never have to work ever again in your life or buy a small country, so why, if you have any kind of intelligence, would you stick with a 500X total bet for 5 Wilds?

We’d say that the playing card design is kind of old (almost to the point that you start to hate seeing it everywhere you go), on a separate note, so this is a tripping hazard.

Magician is the wild. The wild can become any symbol to complete the winning combination and doubles the payout for this combination. The wild can’t substitute for the scatter. 5 Magicians on an active payline win the highest jackpot of 10,000 coins.

Crystal Ball is the scatter. The scatter can appear at any position on the reels to win. 3 or more Scatters trigger 15 free spins. All wins are tripled during the feature. Kind of reminiscent of Bloodsuckers online slot, but more elegant.

We would say that this is a decent game in many respects, but if it wants to become truly great, the creators need to put more thinking into the rewards. The game kind of puts us off by not providing too many bounties, so anything along the lines of “small but regular wins” could be good, for example. We also recommend doing some academic research for more educated game design, which could be more profitable for the game designers as well as clients.

We have to say also that this slot’s animation and sounds are quite simplistic, which will possibly become kind of boring after some time. Update the game in accordance with the latest and greatest trends on the market! That’s how you attract clients.

Our overall verdict? Not bad effort. Paytable kind of sucks. Honestly, we think you can do better than the current biggest award for five top symbols. We’d say about 6 (out of 1000, no, just kidding, out of 10).

However! Base wins are kind of ok, with up to 10X the original bet wins. You occasionally win 50-60X the original bet in Free Spins, which shows that clearly this game has potential. This old slot looks a little rusty, ultimately, so we would probably say after a while move on to better and bigger things like Snow Honeys (this slot completely fascinated us, so we can’t stop talking about it).

With a little brush-up from the guys in the office this slot could easily marry up and become everyone’s favorite.
The theoretic payout for this slot is dead on 96%.
This slot has 5 reels and 20 paylines.

Play the Spellcast Machine for Free