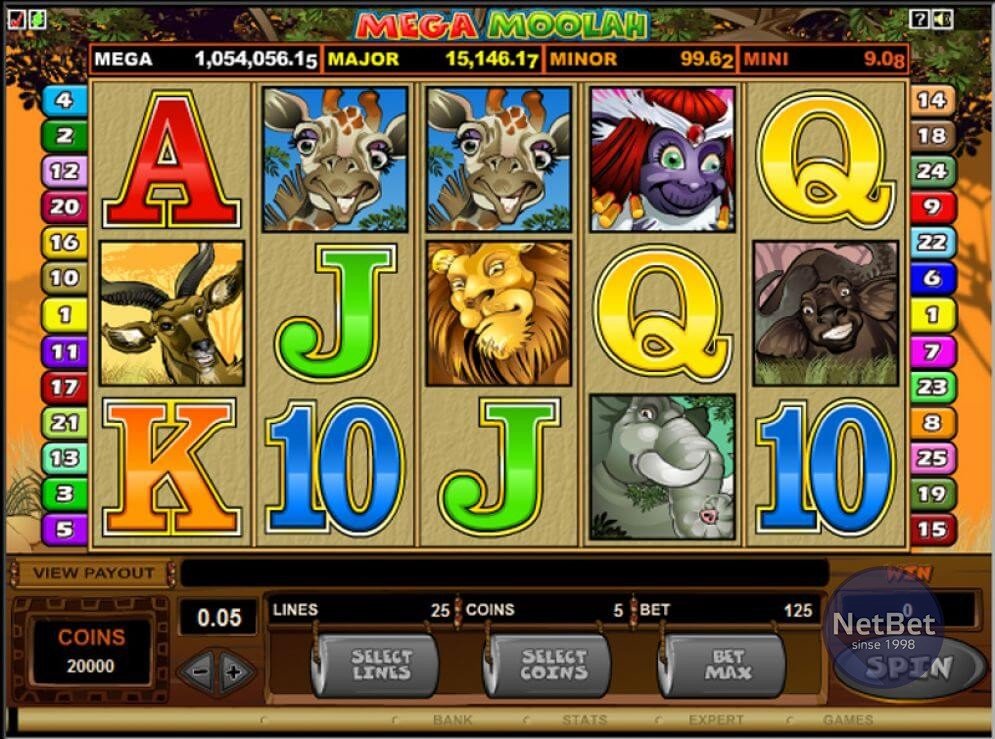 Get Thrilled While Going on a Safari in Mega Moolah Slot

How It All Began

In the year 2006 the gaming software giant, Microgaming launched the game which was fated to become a landmark in the slots machines history. Mega Moolah – the name speaks for itself – is all about money, money and money.The slot does promise great opportunities and huge prizes. The game has 4 tiered progressive jackpots – Mega, Major, Minor and Mini. Mega jackpot starts at $1 million (if you play in euros it starts at €1 million, if in pounds, at £1 million) making the slot extremely enticing for players. Thus, in May 2009 a businessman from Greece hit an unprecedented in the online history jackpot of €6,374,434. I must say that the jackpot had been hit 7 times since its inception and the average size of the jackpot is $3,145,292 which is hit every 119 days. 7 millionaires for 4 years is not bad, I think!

Major jackpot is much more modest, it starts at $10,000. The average size is over $29,000 which is won every 4 days. This jackpot paid out about $2,600,000 already. Minor progressive has $100 in the very beginning and the average jackpot is $181 and hit every 2 hours. The consolation prize in the game is Mini jackpot which is $10. The sum is very small and hit very often, they say, every 3-5 minutes. The progressive jackpot can be won during the bonus game which is triggered absolutely randomly, however the size of bet influences the chances of triggering the bonus round and win the jackpot.

Why Africa and Animals

All of us I believe remember one of the most popular Walt Disney animated films, the Lion King. Just this blockbuster inspired slots manufacturers to create Mega Moolah. The slot is set in the African savanna where we meet the Lion King, Monkey, Elephant, Buffalo, Giraffe and Kudu. Besides the progressive jackpot, the game has quite a big fixed jackpot of 15,000 coins, the wild which doubles the winning combinations, the scatter and 15 free spins with triple prizes.

Mega Moolah resulted in such a success that Microgaming decided to add games to the jackpot and give a new life to some good oldies slots. Thus, in January, 2009 Mega Moolah 5 Reel Drive appeared in Microgaming casinos. By that time 5 reel Drive had been well known and loved by many players and slots developers made a great New Year’s present for those fond of heavy trucks, high speed and road adventure adding the Mega Moolah progressive jackpot to the game.The slot also has a 10,000 coins max fixed jackpot, 10 free spins at 5x multiplier as well as the wild and scatter symbols.

During that year 2 more games were added to the Mega Moolah jackpot. In May, 2009, Mega Moolah Summertime was launched in the online casinos. Summertime video slot was developed in 2006. As the name suggests it is about summer – fruits, sand beach and diamonds. Today the game offers (besides the progressive jackpot) a 10,000 coin top prize, 15 free spins with triple wins. There is a wild which doubles the winning combinations that helps to create and a scatter.

And in August, 2009, Mega Moolah Isis became available to the public. Isis exploits a very popular theme of ancient Egypt and has all the symbols common for such slots – Eye of Horus, Sarcophagus, Royal Scepter, Lotus, Knoptic Jar. Besides, the main symbol is Isis (Egyptian fertility goddess), which is the wild, it doubles the wins when substituting and Hawk, which is the scatter, it gives up to 30 free spins with a 6x multiplier. Just these things have made this slot very popular. So I think, it is not mere chance that gaming developers chose this game to become progressive.The slot has had many opportunities to make a killing and with the progressive jackpot it turned into an unexhausted source of hope to change the life for the better.

To summarize all above mentioned, I can say Mega Moolah progressive slots have state-of-the-art audiovisual effects, good animation and smooth gameplay, all we can expect from such an outstanding software provider as Microgaming is. And the most important thing is that it does give you a chance to hit a life-changing jackpot.