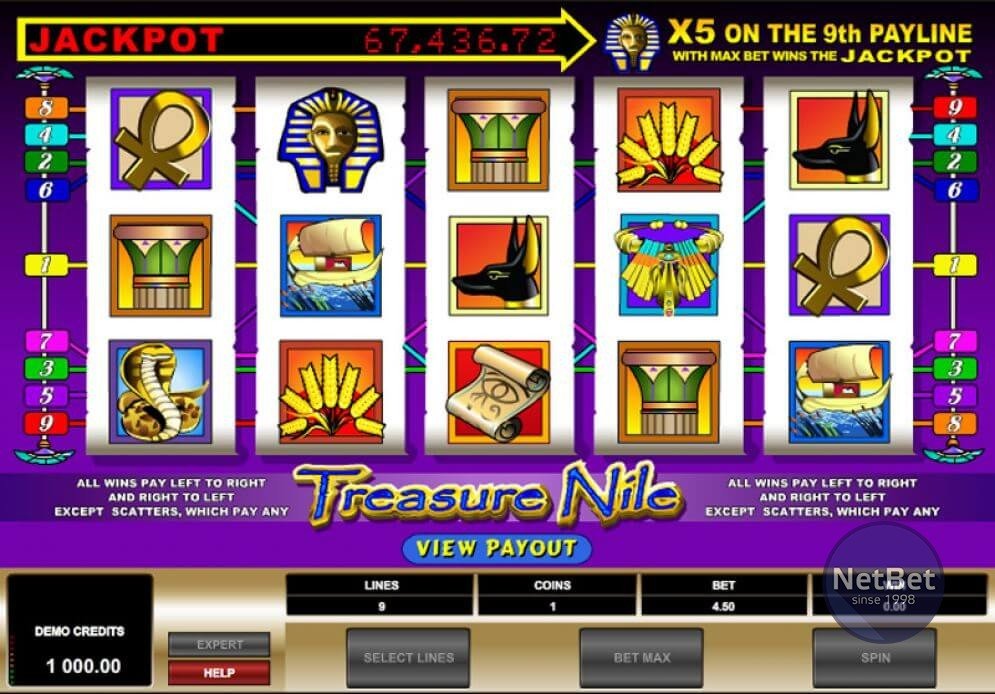 What more could you really ask for in a video slot game? Delightful graphics by the industry leading casino software developer, Microgaming, a tried-and-tested theme that is always a popular choice among players, and the chance to hit a life-changing sized prize through a lucrative progressive slot jackpot: Microgaming’s Treasure Nile slot checks all the boxes for excellent online casino slots entertainment, combined with incredible awards potential.

Microgaming created Treasure Nile Slot as far back as 2004, and it was one of the first slot games that pushed the casino group into the limelight as a creator of top quality, rewarding games. Since then, Treasure Nile slot has not lost its appeal, despite the fact that hundreds of new games, with advanced animations and bonus features have been rolled out since then. If anything, Treasure Nile slot’s classic ancient Egyptian theme, combined with graphics that players will never get tired of looking at, easy navigation, straight forward betting and very high rewards, means that this game is a definite keeper.

We have noted already that Treasure Nile slot is a 5 x 3 reel video slot game with 9 pay lines that remain in operation on every spin. It has a clear ancient Egyptian theme, as seen through the title of the game, as well as the many symbols found on the reels. You will be able to find this theme in other games such as Egyptian Heroes and Secrets of Horus by the casino software group, NetEnt, as well as across several slots by Microgaming such as Mega Moolah Isis slots, another game with a high paying progressive jackpot (if not the highest paying in Microgaming’s arsenal).

Treasure Nile slot was one of the first games in the industry to carry a theme about Ancient Egypt, and its symbols and icons serve as an inspiration for other games in this genre. Among the symbols you will find on the reels are:

Overall, Treasure Nile slot has a very pleasing visual appearance, while its audio features are also on-spot. One thing that we always seem to read about in any review about Treasure Nile slot is that its interface and graphics are so cool, and we couldn’t agree more.

While some online slot games allow you a wide range of choices when betting on the game, Treasure Nile slot is not one of them. Many players see this as a good thing, in that their choices are streamlined and they can head directly to the real action. Treasure Nile slot has a fixed coin value of 0.50, while the maximum number of coins per pay line is one. As such, if you decide to play on all pay lines, the maximum wager is 4.50. You choice range, therefore, lies in how many pay lines you want to play per spin.

There are two jackpots available in Treasure Nile slot. The first is a standard jackpot that is found in regular non-progressive slot games. You will hit this jackpot when you land five Tutankhamun Death Mask icons on any of the first eight pay lines of the game. When this happens, you will be pocketing a 6,000 coin payout on the spot.

The second jackpot – and the one which all players would be thrilled to get their hands on – is the progressive jackpot. First of all, to even be in line to hit this jackpot, you will need to play the maximum nine pay lines (at 4.50 a shot). If you manage to line up five Tutankhamun Death Mask symbols on the nine pay lines, the progressive jackpot will be yours! Microgaming seeds this jackpot at 40,000 credits, but the number rises swiftly and it not uncommon for the jackpot to reach six or even seven figures. Once the jackpot is hit, it will reseed to 40,000 credits. According to a number of sites, the progressive jackpot gets hit approximately every 20 days.

We think that Treasure Nile slot is on par with other top Microgaming progressive jackpot games such as Fruit Fiesta, Isis Slot and Major Millions.

Fans of Treasure Nile slot say that one of the things that appeals to them about this game is that it is all about straight forward slot action. If your only reason to play slot games is to enjoy features such as free spins, multipliers and bonus games, this may not be the game for you. However, if those things are less important to you, then we can definitely vouch for Treasure Nile slot.

While Treasure Nile slot may not be rich in bonus features, the wild symbol is an important key to potentially big wins for players. The Pyramid icons act as the wilds, and they stand in for any other symbol (except the scatter) to complete a winning pay line.

The Golden Scarab Beetle symbol is the scatter, and landing at least three of them anywhere on the reels could reward anything from 5 to 50 times the player’s total number of credits staked on the spin.

We’ve laid it all out for you in the above review: the pros and cons of playing Treasure Nile slot. If you can forgive the lack of bonus features and the fixed coin value, you will love the bright, animated graphics, the streamlined gaming options, the rewarding wild and scatter symbols but most of all, the chance to walk away with life-changing sums of money thanks to the progressive jackpot.