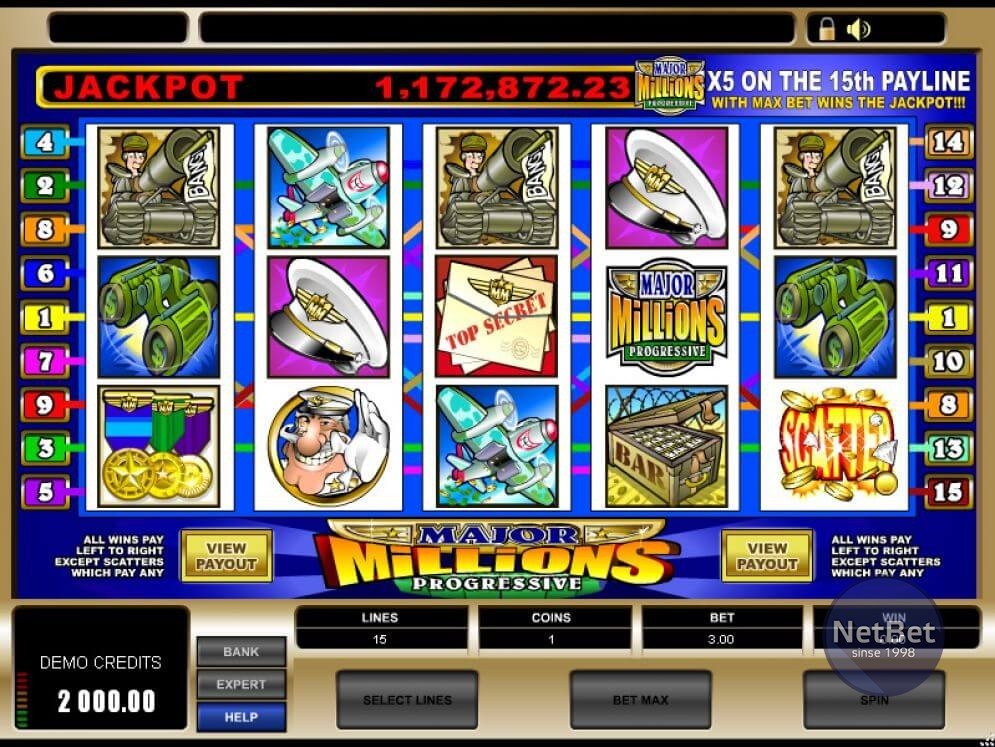 Quick, March! Major Millions and His Bags of Money

Microgaming have a long track record of developing fantastic slots. Their gameplay is pretty much always top-notch, while the graphics are impressive throughout the range – from their oldest titles, to their newer, more feature-rich games.

Major Millions has long since been regarded as one of the jewels in the crown, largely for its progressive jackpot and the chance to win decent money as you spin through the game.

The central character is Major Millions, an army major who inexplicably seems to have turned his attention to slots. Unlike the stern, uncompromising stereotype, this army major seems to be a bit too smiley and welcoming, but the theme still makes sense and provides enough of an interesting backdrop to make this game appealing.

Of course, the real reason so many people choose to head over to Major Millions is just that – the potential for winning major amounts of money from the progressive jackpot. Not everyone can or will ever win the progressive prize, but even for those who play through with some good luck, there is still some decent money to be won.

Looking beyond the theme for a moment, this is a 5 reel game with 15 possible paylines, and it has remained largely unchanged since it first appeared on the scene back in 2000. For some players, this means Major Millions has fallen behind the times.

But for me, you only have to consider its popularity, and jackpots frequently running into the hundreds of thousands, to see why this is still a contender. Plus, why fix it if it isn’t broken?

One of the biggest wins I’ve ever seen from an only slot, $1.8 million, was won by a player on Major Millions. I bet that’s got your attention. When you consider that this is a big-guns game about big winnings, the lack of bonus features and the slightly tired graphics start to pale into insignificance.

So why should you take this game in particular for a spin, especially when there are so many others to choose from? Let’s start our review by delving into the feature symbols, bets and those all-important jackpots so you can better make up your mind.

The Major’s Most Important Symbols

The military theme running through this game is reflected on the reels, with their many, various symbols harking back over what has no doubt been an illustrious career for the Major. The Major Millions logo is the wild symbol, which behaves in the way you would expect, by taking the place of anything you might be missing on your payline.

As usual, it doesn’t step in for either the scatter or the bonus symbol, but will otherwise help confirm your payline as a winner. If you line up five of these wilds on line 15, you’ll be seriously in the money.

This is the progressive jackpot winning combination, and based on the recent payouts, seems to be triggered roughly once every three months. In ordinary play, the wild also acts as a 3x multiplier, so you walk away with considerably more for your winning spin when a wild is involved.

There’s also a scatter symbol, which looks like it might be a bomb-blast of cash, but for the word ‘SCATTER’ emblazoned across it. In some games you would expect that to trigger a bonus round, but Major Millions doesn’t have any additional rounds as such. As an alternative, you’ll pick up an instant cash win for your troubles, depending on the number of scatters you’ve been able to turn onto your reels.

Aside from the wild and scatter symbols, the highest paying value symbol on the board is the waving Major Millions himself. Five of these will net you a payline win of 1000x, or 3000x if you’re completing your five on the payline with a wild.

The bet range in Major Millions runs from £0.20 to £3.00 per spin, with the base game jackpot standing at an impressive 8000x. That means you could be in line for a win of up to £24,000, even if you’re not lucky enough to land the progressive jackpot.

Obviously by its very nature, the progressive jackpot is consistently increasing in value, and only resets every time the prize is actually won somewhere in the world.

There is a ticker that will help you see where the jackpot has reached in terms of value, and remember it’s the five Major Millions symbols you need on the fifteenth payline if you want to walk away a major winner.

Our Verdict on Major Millions

Major Millions has done what other slots can only dream of – it has truly stood the test of time. In just a short while, this slot will hit the 20 year old mark, and based on its current popularity, I’m confident it will still be going strong.

At the same time, it doesn’t have the best graphics you’ve ever seen, nor does it have the bonus rounds or video intros that seem to keep other slots games fresh. While its RTP is notionally quite low at 89.37%, the appeal here comes from the sheer size of the winnings available – both in-game and through the progressive jackpot.

There are no free spins which can hamper excitement levels somewhat. But despite its cartoony-feel, this is a serious slot with the potential to make you seriously rich. And with a track record of paying out in the hundreds of thousands, and even the millions, you’d be mad to give it a miss.

I recommend checking out Major Millions if you haven’t done so already. Even if you don’t go on to win a fortune, it’s worth checking out the living, breathing classic of the slots industry, if only to see what all the fuss is about.