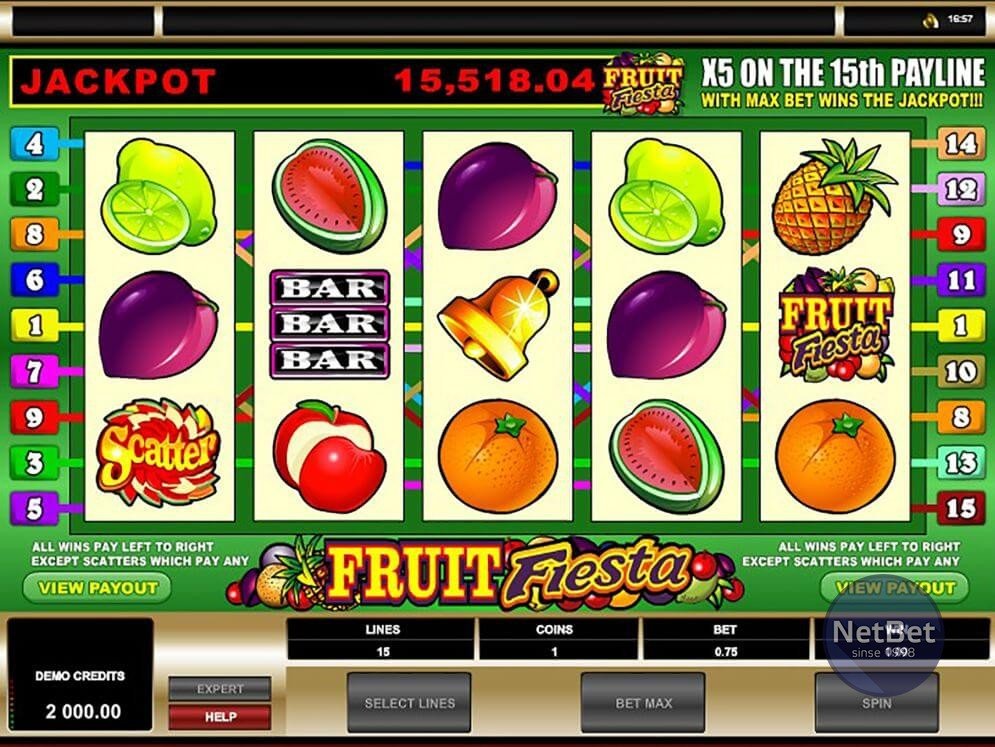 Imagine a fruit salad packed with watermelon, plums, limes, pineapples and oranges. Then convert that image into an online slot. You’ve just pretty much imagined exactly what it’s like to play Fruit Fiesta, the popular Microgaming slot.

This fruit can also leave a pleasant taste in your mouth – especially if you hit the in-game jackpot of 9000x, or go one better and land the progressive prize.

Fruit Fiesta is by no means a complicated slot. It’s a basic enough game, and you’d have to be pretty useless to find it difficult to play or to find your way around. But underneath the welcoming, user-friendly interface, this has all the hallmarks of a Microgaming classic.

The jackpots are tasty enough on their own, and it’s easy to play through dozens of spins without a break. But there’s no real bonus round or gamble features to speak of. If you’re looking for a full-scale multimedia entertainment experience, you’ll probably be left wanting.

The RTP of just 90% is another concern as well – I tend to play games that payout at a much higher rate, often 95%+, but that’s not to say you shouldn’t give Fruit Fiesta a try.

I’ve read some players calling this game boring. I think that’s a little harsh, though I do see where they’re coming from. For me, it’s not boring – it’s just focused on the core elements of slots play, and tries to emulate AWP-style slots, rather than trying to emulate the all-singing-all-dancing type of game you find elsewhere in the Microgaming back catalogue.

It’s up to you what you make of it. If you’re looking for a straightforward, no-nonsense chance to win some decent money, this might still be up your street. But what are the symbols you’ll come across along the way, and what should you look out for in terms of bets and jackpots on your journey to a fruity fortune?

A Picnic of Symbols in Fruit Fiesta

As a fruit-based game, it should come as no surprise that the majority of symbols you’ll find across these reels are fruity. As well as the classic fruit symbols you’ve come to expect, you’ll also find other familiar features like the bell, the BAR symbol and lucky 7s.

The wild symbol in this game is the Fruit Fiesta logo. It has the usual effect, subbing in place of missing symbols to make up your paylines. So if you’re one symbol short on your payline, a wild in the right place will convert that into a winner. The wild is also your key to the progressive jackpot – you win this by lining up five of these symbols across the fifteenth payline. It’s quite a specific combination, and you won’t be hitting this regularly, but if it does come up for you, it could easily change your life.

The scatter symbol in Fruit Fiesta is a similar fruit-bowl styled symbol, and you’ll recognise it by the word ‘SCATTER’ that’s written across it. If you hit three of these anywhere on your board, expect a payout – similarly for four or five of these symbols, you’ll get an added boost to your bankroll.

Usually you would expect the scatter symbol to trigger an additional bonus round, but there isn’t one – so it’s just a straightforward payout based on the number of symbols that turn up on your reels. However, this can still be a high paying bonus if these appear in your game.

When it comes to the main symbols, the highest paying is the 7s, followed by the triple BAR symbol. Line up 5 of the 7s and you’ll walk away with 750x, while 5 of the BARs is equal to a 400x instant payout.

One of the things that puts me off slightly about this slot is the 90% RTP. Remember, this is the rate at which the game pays out – the lower the rate, the less money you’ll get back over the long-term.

Of course, that doesn’t mean you won’t win along the way, and I’ve still enjoyed some decent paying spins here. I suppose it’s just a question of how long you want to play for – I’d advise that you try for the progressive, but don’t make this a regular game on account of the lower RTP.

The jackpot stands at 9000x for this game, which is pretty decent by any measure. That’s obviously excluding the progressive jackpot, which you can see at the top of the screen as it continues to tick upwards in value. You can bet from just £0.05 per spin, right up to £75 – which would be £450 to £675,000 at the maximum bet.

Our Verdict on Fruit Fiesta

Fruit Fiesta is good fun to play for a while, but it’s quite a limited game in reality. When you compare it to some of the other titles in the Microgaming range, it looks positively stone age. This could be because it’s a nostalgic take on old-style fruit machines, but it’s still something to bear in mind when you’re deciding whether or not to play here.

There are no bonus rounds, no free spins, and even the progressive jackpot isn’t the biggest I’ve seen. But whether you’re playing on mobile or on desktop, there’s still ample opportunity to win from this game, especially if you’re prepared to bet slightly more aggressively on each spin.

For me, Fruit Fiesta is a game you probably need to try out to make up your own mind. It is a Microgaming title, so it’s a decent experience. But from what I’ve seen, it splits slots fans down the middle, between those who are serious about winning, and those who prefer more visually pleasing slots games.