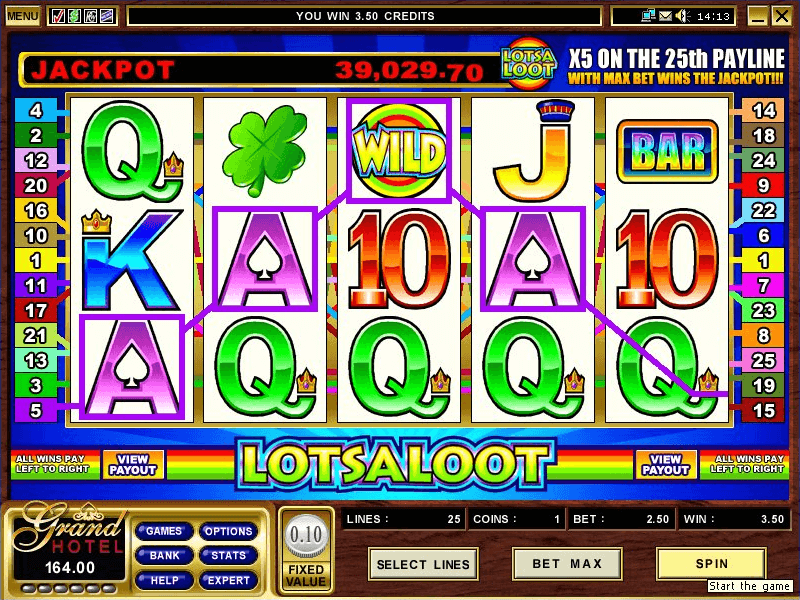 A Loot of Gold Coins...or a Lot of Old Cobblers?

When I’m playing slots, I want to see steady, recurring wins that boost my bankroll and give me a good reason to keep playing. And with slots like LotsaLoot from Microgaming, there’s a clear genre for those players, like me, who prefer just to cut to the chase.

Don’t get me wrong – a good theme can make a slots game enjoyable, and I do like playing a wide variety of games. It’s just that I wouldn’t want to discount a particular slot simply because I didn’t enjoy the theme.

With LotsaLoot, there isn’t so much a theme, as a nod-back to some of the older generation slots we’re all familiar with – plus a faint hint of the luck of the Irish, if you’re being picky. You’ll find good luck symbols like four-leafed clovers, as well as piles of gold coins, but there isn’t much in the way of a unifying concept tying it all together.

Behind the scenes, this is a basic 5 reel slot, and to be honest, I’ve played better paying games in my time. The RTP falls just below 90%, which for me is a little on the low side. That doesn’t mean you shouldn’t play it – but just don’t expect to be winning on every spin, or even as regularly as would be the case in a game with a higher RTP.

There is a progressive jackpot on the line here, which tends to run into the thousands, and sometimes even the tens of thousands. This isn’t quite in the same league as the jackpots in Mega Moolah, and some of the other big money progressive games, but it’s still enough to make your day very special if you happen to land the win.

So let’s dig a bit deeper into this slot and find out what’s really going on, from the symbols you’ll come across to the jackpot payouts on offer. I can’t promise this is definitely the slots game for you, but it has a number of features which merit at least giving this game a try for yourself.

Quick links show
Symbols That Count In LotsaLoot
Bets and Jackpots: How To Get Your Hands on the Loot
LotsaLoot Slot Verdict

Symbols That Count In LotsaLoot

The garishly rainbow coloured LotsaLoot symbol acts as the wild card, completing your paylines with whatever is missing to give a winning combination. It is also important for triggering the jackpot win. You need five of these symbols to win the jackpot on the 25th payline, so you need to be playing across all lines if you want to be in with a chance of scooping the not-too-shabby progressive jackpot fund.

Because there is no additional bonus round or free spins bonus on offer, there aren’t any more special symbols, beyond the wild, that you need to take into account. Instead, the highest paying value symbol is the pot of gold, followed by the rainbow 7 – five of these will pay out 750x or 500x respectively.

Five of the LotsaLoot signs on any payline other than the 25th will net you the in-game jackpot of 10,000x, which is still pretty decent, albeit not quite the main prize on offer

Bets and Jackpots: How To Get Your Hands on the Loot

The bets per spin range from £0.25 to £2.50. At the minimum per spin value, that means the jackpot is worth £2500 – at best £250,000. For what it’s worth, I haven’t spoken to many people who have won anywhere near the top end, excluding the progressive jackpot, but players do still enjoy some nice wins along the way, generally ranging from a couple of hundred to a few thousand.

The 10,000 coin jackpot is a nice standalone prize for those realists who don’t fantasise too much about winning the progressive. Even if you do scoop the progressive, it’s hardly likely to pay for your retirement. A few nights out – definitely. But as long as you’re not hoping to make your millions here, you’ll be alright with whatever you can win along the way.

The RTP on LotsaLoot clocks in at less than 90%, and that’s something of a turn-off as far as I’m concerned. You might get lucky and land a 10,000x win, or go one better and hit the jackpot.

But with such a comparatively high house edge, I certainly wouldn’t be holding my breath. For me, this game really needs to be a big payer if it wants to compete with other, objectively better games, and for what it’s worth, I think it falls a little short.

The game design and layout are basic, and the features are almost non-existent, beyond the progressive jackpot. But at the same time, I don’t think this game is pretending to be something it’s not. Whether you play the 5 reel, or the 3 reel version, it’s meant to be a straightforward game, and at least in that respect it lives up to its billing.

It might not make you super rich, but there’s still bounty to be won on LotsaLoot. I would recommend taking it for a spin to see for yourself, but long term? You’re probably better playing other slots.