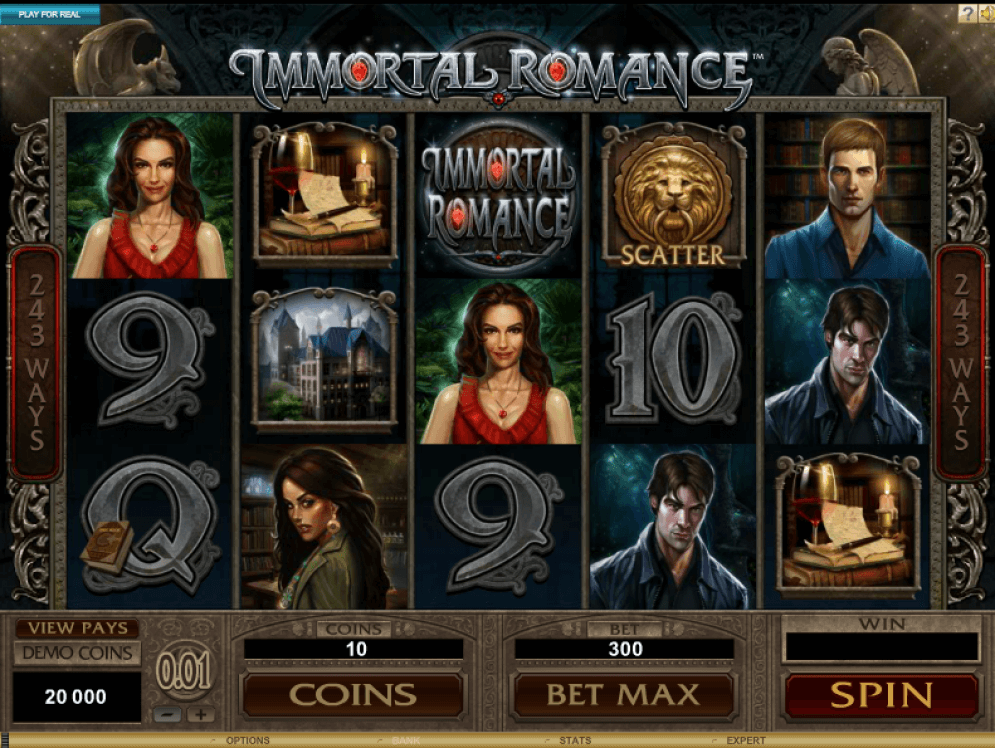 Immortal Romance: Will You Love Me Forever?

Like a dough-eyed girlfriend pressing you to commit, Immortal Romance is the slots embodiment of true love. Launched in 2011, it remains one of the most popular slots from leading developer, Microgaming.

For me, slots don’t come much better than those from Microgaming, and with Immortal Romance ahead of the pack, it’s clear this is a slots game you should definitely check out.

Immortal Romance has been described as a slots masterpiece, bringing together stunning graphics, an impressive soundtrack and solid gameplay. It’s similar in a lot of respects to Thunderstruck II, just in terms of how the game plays. While its theme is a little off the wall, don’t be put off – a couple of big wins here, and you’ll be pledging your undying love forever.

There’s a loose vampire theme going on here, in the style of the Twighlight series. The reels are adorned with guys, girls and a few other gothic, romantic symbols, alongside the usual high cards.

While the theme might not be everyone’s first choice, it’s just a wrapper – underneath, this is a slots game that competes with the very best of them.

The in-game jackpot stands at an impressive 60,000 coins, with a top possible payout of a whopping 3,654,000 coins. Set across 5 reels, there are 243 winning combinations possible on any given spin.

The bonus round is pretty cool as well, and a good way to help bump up your overall return from this slot – more on that later. With an RTP of 96.8%(!), it’s also towards the upper end of possible returns from slots games, and a lot higher than the majority of slots you’ll play.

As you play through the game, there are a few symbols in particular you need to look out for. Whether it’s triggering the bonus round or simply giving you the biggest wins on completing a successful combination, these symbols will be important to your success with Immortal Romance.

Bonus games, wilds and free spins are all good for your balance

Symbols of Love in Immortal Romance

The gothic Lion door knocker is the first important symbol you need to identify on the reels in Immortal Romance. This is your key to the jackpot – landing five of these across your reels results in the maximum in-game win of 60,000 coins.

This is the scatter symbol in the game, and 3 or more of these symbols will also open up the Chamber of Spins – the bonus round that has set tongues wagging in the online slots community.

There are four levels to the Chamber of Spins, and each one is represented by one of the characters you’ll recognise from the reels. You start at Amber, who appears the first four times you trigger the Chamber of Spins bonus. She brings 10 retriggerable free spins with a 5x multiplier.

Next up, you’ll hit Troy on your fifth time in the bonus round. He delivers 15 free spins, plus the Vampire Bats feature, which can transform symbols on your reels into 2x or 3x multipliers – not a bad way to start racking up bigger wins.

Michael is next on your 10th time triggering the bonus, delivering 20 free spins and the Rolling Reels feature. This can lead to an additional multiplier of up to 5x.

Finally, you’ll reach Sarah, from your 15th time triggering the bonus round. She brings a whipping 25 free spins, complete with the Wild Vine feature, which turns other symbols into additional wilds at random. The more wilds you land, the more free spins will be added to your total, up to a total of 29 free spins in all.

The Chamber of Spins is one of the main talking points about Immortal Romance, and it’s obvious to see the reason why. I’ve seen some very decent wins from this bonus, and there’s no reason why you shouldn’t either.

There’s also a feature called ‘Wild Desire’, reflecting the themes of passion running throughout the game. This can turn anywhere from 1 to 5 reels entirely wild, making it much easier to get payouts for the duration of its effect.

This appears at random throughout the game, and there’s no way of knowing when next it will appear – but when it does, it can be worth decent money.

We’ve already looked at the jackpots, which are generous to say the least. And at almost a 97% RTP, this slot isn’t messing about. Your minimum bet is 0.01-0.20 per coin, with a coins minimum of 300 per spin.

That’s not a small buy-in if you consider running through 100 spins or whatever, but it’s reflective of the level of prizes available here if the reels fall in your favour. Especially when you consider the free spins bonuses and the randomly appearing wilds, playing with a higher per coin value might actually be a worthwhile strategy.

Immortal Romance is one of those rare slots games that people pretty much unanimously regard as one of the best.

Of course, coming from Microgaming, that’s hardly surprising. But given the unusual theme, it’s testament to the mechanics of this game that so many people choose to play it on an ongoing basis. The RTP is hard to fault at 96.8%, and the jackpots range from the fantastic to the mind-blowing.

The gameplay is entertaining, and the accompanying soundtrack makes you feel like a true winner every time a payline is completed. The bonuses and free spins on offer are pretty neat too, making this a game with bags of entertainment value, as well as money to be won.

I find it difficult to fault Immortal Romance in any way, and coming from a picky reviewer, that’s a testament to just how good this game is. Often described as a slot masterpiece, that’s a view I firmly share. Check out Immortal Romance now and see for yourself – slots truly don’t get much better than this.