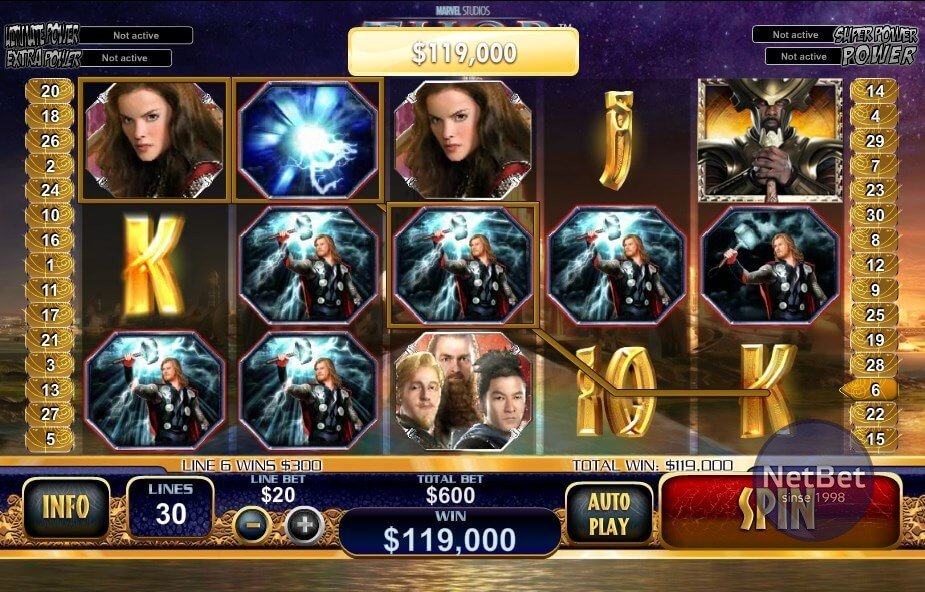 Unfortunately, Marvel Entertainment didn’t renew the deal with Playtech and the license of using Marvel comics ended in late March. That’s why today you won’t find any Marvel series slot, the casino software developer removed all of them from their gaming portfolio. Playtech notified operators that Marvel slots machines were no longer available and Thor The Mighty Avenger is sadly one of them. You may learn more about it by reading our blog. But you can choose: Thunderstruck Slot or Thunderstruck 2.

Thor the Mighty Avenger is a 5 reel, 30 payline video slot with amazing bonus features and Marvel progressive jackpot. The game was released in late December 2012 and based on Norse mythology and Marvel comics. You’ll see Hemsworth’s face as the main symbol, Thor, on the reels. The other symbols are Odin, Loki, Heimdall, Sif, warriors and high value cards from Ace to 10.

Thor’s hammer is the scatter. Three or more scatters anywhere on the reels give payouts.

When Heimdall, the Gatekeeper of Asgard and Master of the Bifrost Bridge, covers the middle reel in the main game or free spins, the Rainbow Bridge Bonus Game starts. You have to choose between two orbs in order to go to Earth or Jotunheim. Frees Spins are played on the special reels. During the Jotunheim free spins Thor can be stacked on all reels and not stacked on reel 3. An extra wild, Laufey who is the king of the Frost Giants and an enemy of Thor, appears on the reels while the scatter hammer is removed. If there is a winning combination Laufey freezes it for one spin. The free games can be played infinitely until Heimdall is stacked on the middle reel. After that the player goes back to the Rainbow Bridge and may return to the main game or go to the Earth free spins.

During the Earth free spins Thor also appears on all reels and is stacked. It is not on reel 3. Surtur is another Thor’s enemy appears on reel 5 and hammer is removed as well. Surtur on the reel randomly blows fire on 2 to 6 symbols on reels 1 to 4. These symbols act as multipliers. You can get an up to 16x multiplier. The received multiplier will remain fixed for up to four spins. When the Earth free spins end, the player is taken back to the Rainbow Bridge and may return to the main game or go to the Jotunheim free spins.

The bet varies from $0.01 to $20.00 per line, so the maximum bet is $600. The top jackpot in the main game is 5000 coins. But there is a possibility to win Marvel progressive jackpot. In reality there are 4 jackpots: Power, Extra Power, Super Power, and Ultimate Power. The Jackpot game can be triggered absolutely randomly. But the more you bet the higher your chance to win Jackpot game is. There is a 4×5 grid with 20 squares, each square hidesPower, Extra Power, Super Power or Ultimate Power jackpot signs. You have to click on the squares to reveal the signs. 3 similar jackpot signs win the similar jackpot.