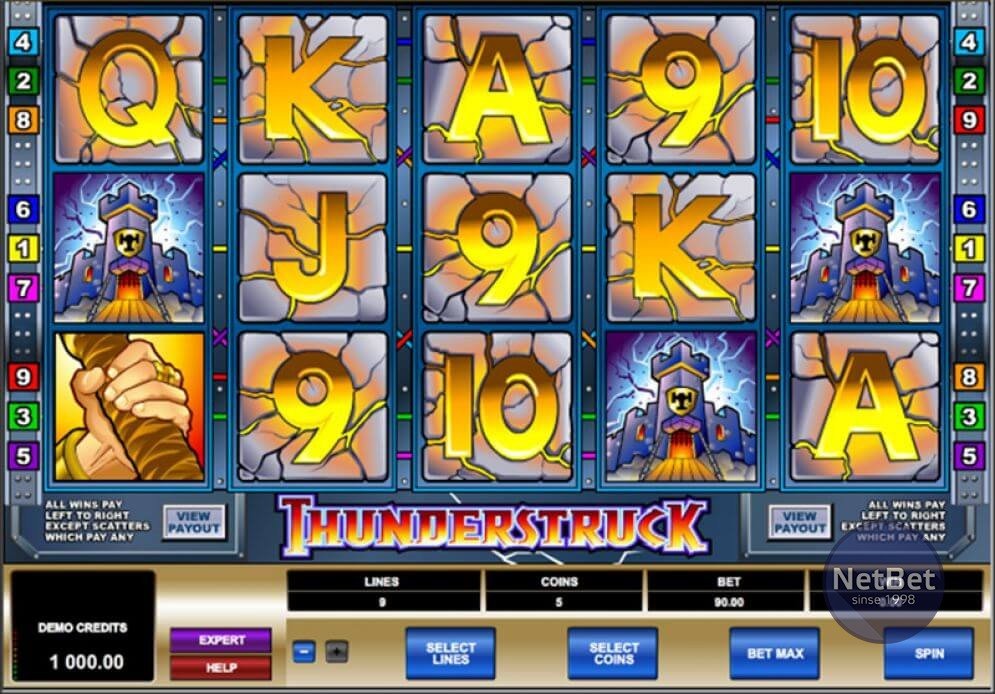 A Clap of Thunder, A Flash of Light…

Norse mythology is packed with legends of gods – none more celebrated than Thor, the mighty god of thunder (amongst other menacing things). No surprise then that Microgaming chose this as the backdrop to one of their most successful ever slots – Thunderstruck.

Back in 2003, when the Internet was but a moody youth, Thunderstruck burst onto the scene, revolutionising the slots genre and paving the way for a new generation of exciting slots games. Today, it’s a little bit dated, and not as easy on the eye as once thought. Still, it’s well worth checking out, if not for the nostalgia, for the chance to win decent prizes.

There are loads of reasons Thunderstruck has been so successful, but a large part of the reason is the game’s 10,000 coin jackpot. You can play from 9p a spin, so even at the lowest amount, the jackpot would be worth £900.

When you consider that the max spin is £45 a whirl, that rises up to an incredible £450,000 maximum win – enough to change most people’s lives in an instant, and reason enough alone to check out this slot for yourself.

Better still, the payout percentage, or the RTP, stands at 96% – not a bad percentage, when you consider the slim house edge – a lot better than the house edge in double zero roulette, for example. This means that you’ll find yourself winning on a regular basis, and the payouts have been known to be quite generous.

At its core, the 9 paylines across 5 reels makes this a simple enough game. However, when you factor in the potential for big money wins, and of course the engaging theme, there’s enough here to keep even your avid slots fan wanting to come back for more.

Thunderstruck remains one of my go-to slots. I’ve won decent money here before, and on its sequel, Thunderstruck II, but more than that, I enjoy coming back time after time to keep spinning the reels and chancing my luck.

With some of the big wins ranging into hundreds of thousands available from this slot, and average wins from the free spins round clocking in at above 30 times your stake, I’m confident you’ll soon feel the same.

With its Norse theme, you’d expect to see Norse gods and related symbols on the reels. And you’d be right. Thor, rams, Thor’s hammer, and other symbols nestle amongst suitable mythological-looking high card symbols to ensure consistency across the visuals. Aside from the main symbols on the reels, there are several other symbols you’ll want to pay particular attention to.

Thor: Thor is the game’s wild symbol, behaving in the usual way. That means it’s a wildcard, so is effectively as good as any symbol you’re missing when it comes to completing your payline. As an added bonus, any paylines running through a Thor symbol attract a multiplier worth 2x your winnings, so there’s twice as much reward for your payline.

Thor is also your key to unlocking the game’s jackpot – line up five of the symbols on your reels and you’ll walk away with 10,000 coins. Even if you land 4, you’ll get an instant Thor win of 2000 – as well as any other winnings from your payline, plus the multiplier. Not bad at all.

Rams: Known as the ‘Scatter Rams’, these guys are good news for your game. 3 or more trigger 15 free spins, plus a scatter bonus depending on the number of these symbols on your reels. The scatter bonus can also be retriggered multiple times, and I’ve found this to be one of the best ways to bump up your winnings in this slot.

Other than these symbols, the next highest paying payline is 5 of Thor’s hammers, which will net you a win of 750 coins. It should be clear by now that the paytable is very generous here – no doubt a big part of what has kept this game so popular for so long.

The only bonus round, if you can call it that, is the free spins bonus. They are retriggerable, and they tend to be quite generous payers from what I’ve found, so it’s not at all a bad way to bump up your winnings. It’s also pretty nice that you get the extra payout simply for landing the scatters – this ranges from 2 coins for 2 of these symbols, up to 500 for 5 Scatter Rams on your reels.

Most people steer clear of Thunderstruck in favour of its baby brother, Thunderstruck II. While the sequel has the edge in terms of graphics and gameplay, it’s worth revisiting the original, and going back to the game’s roots – with some of the wins I’ve had, it would be hard to ignore the payout potential tied up in the original.

Thunderstruck is one of my all-time favourite slots, and probably the best advert there is for why Microgaming slots are so popular. And I’m not alone – Thunderstruck has been consistently popular since 2003, for its great paytable, good theme, and impressive payout percentage.

It’s a high variance slot at times, but that’s more than made up for when the wins start coming. I’ve seen some really generous wins from this game, and when it’s in the mood to pay, it feels hard not to add to your bankroll.

An honourable mention too for the sequel, Thunderstruck II – play them both together if you want the best experience of what these games have to offer, or if you’re just looking to mix things up a bit.

Find out for yourself why this game is such a classic – you’ll be glad you did, and with any luck, you’ll see Thor’s hammer coming down in your favour.