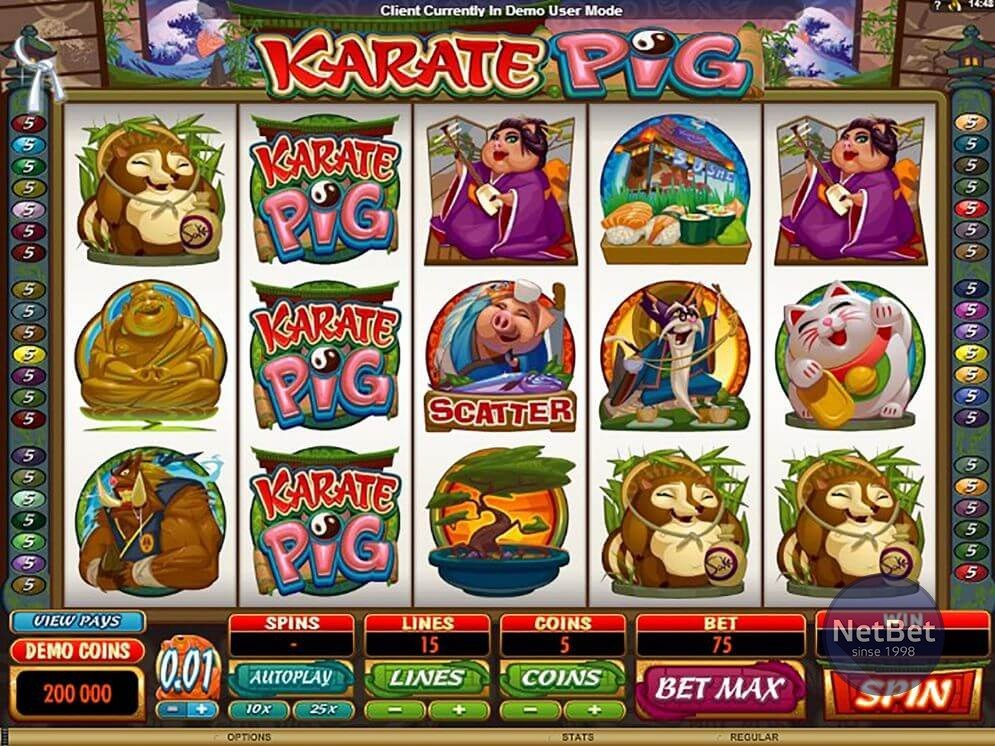 Martial Arts have its roots in ancient times. The archeologist found the caves that have scenes of battle on the walls. Those ancient paintings dated back between 10,000 and 6,000 BCE. Mixed Martial Arts was an event at the ancient Olympics. It was called Pankration and is the only event that hasn’t been reinstated in the modern Olympics. Today we all are sure that the term “Martial Arts” came from Asia, however it originated from European combat systems. “Martial” is derived from Latin, meaning “arts of Mars”, the Roman god of war. There are plenty of online casino slots machines based on Martial Arts and one of them is Karate Pig.

What is special about Karate Pig slot game?

Karate Pig is a 5 reel, 40 payline video slot. This slot uses a popular Japanese martial art theme. Besides Karate Pig, Karate Pig logo and Gold Coin as symbols on the reels there are Japanese icons including a funny Sensei, fat Geisha, fierce Monster, laughing Buddha, Cat, Sushi and Bonsai Tree. There are 33 winning combinations in this amazing game.

Symbols to look forward to

Wild: the wild Karate Pig logo is stacked on the reels meaning more winnings for players. Even two wilds from left to right will give a payout and five wild symbols can bring the top fixed jackpot of 2,000 coins. The Karate Pig logo substitutes for all symbols except scattered Karate Pig and Gold Coin.

Scatter: there are two scatters: Karate Pig and Gold Coin. They don’t create any winning combinations, but they trigger bonus features.

Karate Bonus: the highlight of this slot is a multilevel bonus round. Three or more Karate Pigs scattered on the reels start the Karate Bonus. There are two bonuses – Pork Chop Bonus and Hammer Bonus – to choose from. During these bonus games players should show their culinary skills and select one item from the six shown to receive prizes. Each time the player wins the bonus he/she gets a higher ranking karate belt. Once the player gets the black belt which is the seventh karate ranking, he/she will start the Final Showdown bonus. During this game the Karate Pig should fight against a monster. There are three rounds. If the Karate Pig wins, it gets generous prizes.

Bet: the maximum number of coins per line is 5 and per spin is 200. This is a penny slot machine meaning the coin size is between $0.01 and $0.10. You can try this game for free right here or join any casino online, register, load your real money account with any chosen payment method and feel thrill and excitement of the game.

Summing Up of Karate Pig slot

The Karate Pig slot is a funny game to play and get casino experience. The game has hilarious cartoon-styled graphics, exciting animation. You will hear oriental music and true-to life sound effects. The bonus features can be triggered quite often. The big minus is tiny payouts in the main game, but the bonuses allow you to win your losses back.

You can also try other games with the Martial Arts theme. Monkey King Slot will tell you an ancient Chinese myth, ThunderFist Slot will give you some lessons of magic fighting. All of the games are fantastic.