Baccarat is perhaps the most elitist of all casino games, associated with top-drawers, high-rollers, smart dressers and beautiful casinos. 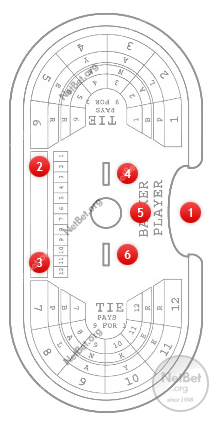 This elegant card game has simple rules, that makes it even more appealing for players. Baccarat is played at a table with a special layout on it. There are several people at the baccarat table namely a croupier, two dealers and up to 14 gamblers. The croupier (1) stands in front of the table in the middle of it. He makes calls on the hands and directs players according to play procedure. The two dealers (2, and 3) stand behind the chip stack. Their duties are to pay and/or to take the players’ bets depending on the results for the hand.

At the beginning of a game the dealers shuffle all eight decks of cards together. Then the croupier takes, roughly, two decks from the top and shuffles, or in other words “laces” them into the remaining cards before putting them in a covered “shoe.”

The player at spot 1 (if he wants) can become the “Banker,” and deal two cards for each hand. Two hands – the “Player’s” hand and the “Banker’s” hand – are dealt in a given round. The players must predict which of these two hands will score a point value closest to 9. If the hand scores over 9, the left digit is not counted. For example, 9 + 8 = 17, counts as 7. The hand with the highest point value wins. Suit of the cards means nothing in baccarat

Individual players do not get cards in the course of the game. They bet on whether the Player’s and the Banker’s hands are going to win or tie.

Hands worth both 9 and 8 are called “naturals,” where 9 beating 8. If the Player hand or Banker hand has a natural 8 or 9 and the opposing hand is lower, the natural hand wins.

and similar combinations which totals 9 or 8 are NATURAL. 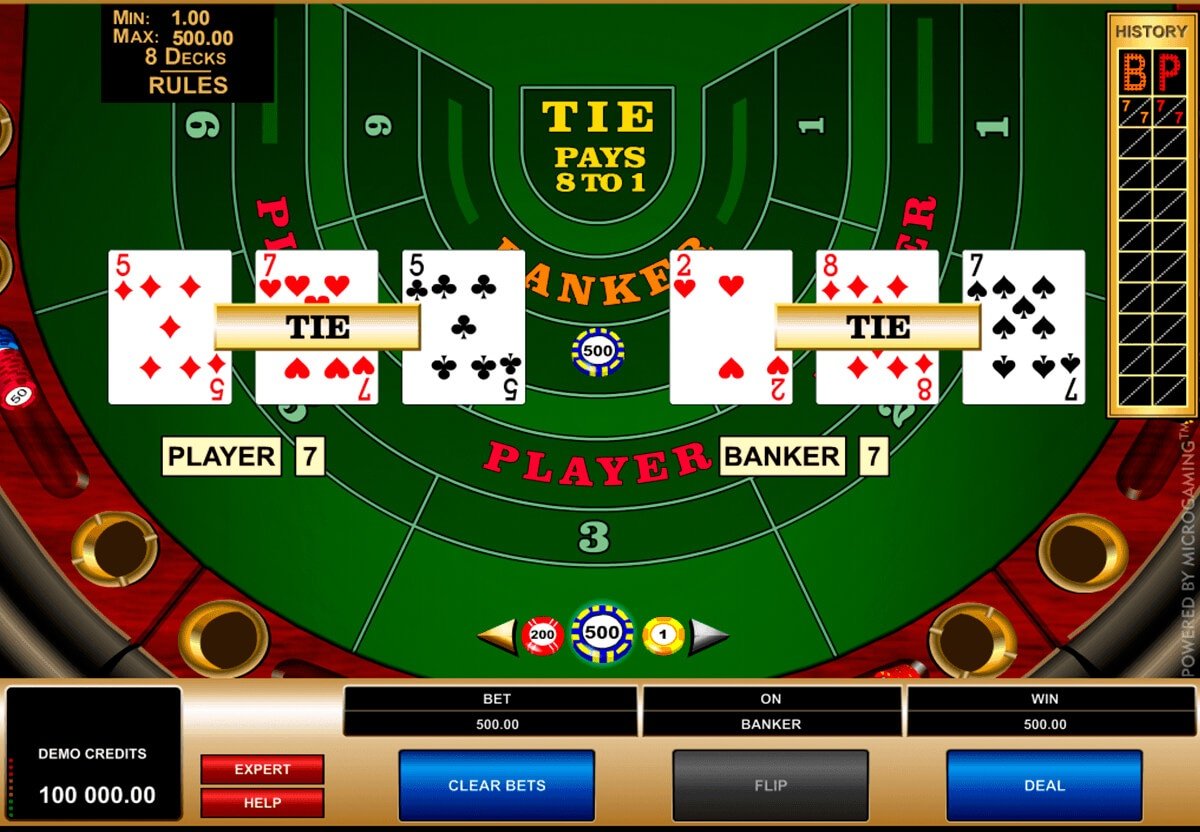 How to Count Hands

= 7 the hands with the point value not exceeding 9 are very simple to calculate.

There are special rules for drawing a third card. These rules are slightly complicated. Have no fear, however, if you are new to baccarat; just learn the rules and trust that with a little experience the rules will be second nature to you, as they are to the croupier, who really cannot cheat in this, as observers would blow the whistle on him and he’d either be out of the casino, job hunting, or talking to a lawyer about defense strategy.

Here are the circumstances under which a third card may be dealt. The Player gets the first option for receiving a third card.

You can learn a table with detailed drawing rules below. The first table (Player’s Score) is for the player to get a third card. The second one describes what to do the banker with different player’s third cards.

In Baccarat you can bet on Player, Banker or Tie. If you bet on the Player and win, you will get 1 to 1. A winning bet on the Banker pays out 1 to 1 as well, but you must pay a 5% commission back to the house. This commission is collected at the end of play, not after an individual hand. The commission is taken because the Banker has a statistical edge over the Player. The Tie bet pays out 8 to 1 but a tie has the lowest odds.

There are two distinct options when it comes to Baccarat: Big Table Baccarat and Mini Baccarat. Big Table Baccarat is often limited to high-roller rooms in the real casinos, but you can find an online version that doesn’t require a tuxedo or a limitless credit line with the house.

When it comes to the gambling, it’s disarmingly simple. There are three bets you can make; on the banker, the player or a tie. If you’re looking for some inside information, don’t bet on a tie. It does happen, but the house advantage on that one is 14.3%; that’s just too big to base a strategy of any kind around. Occasionally there’s a ‘Pair Bet’ circle, too, which you should ignore for the same reason.

So really there are two bets, the player or the banker, and the whole basis of the game is to decide which hand will end up closer to the combined total of 9. Yes, that’s it. It’s closer to Blackjack than anything else, so if you’re comfortable with the age-old game of 21 then you can wrap your head around Baccarat too.

Once the bets are down, the dealer places two cards face up for the banker and two for the player. If the sum is greater than 10 then the 10 is disregarded and the remainder is used, so a 9 and a 7 will equal simply 6. You cannot bust.

Face cards and tens count as zero, Aces count as 1 and if the player has less than 5 then they will receive one more card. It’s really that simple.

OK, it’s not, there are lots more rules, but this is the essence of Baccarat. It’s a simple game you can pick up and play, with a low house advantage and good odds of winning. There isn’t a huge strategy you can employ to tip the odds in your favor and it’s more of a pure game of chance.

So if you want to play James Bond for a day, don’t be afraid of Baccarat. It’s really not that complicated.