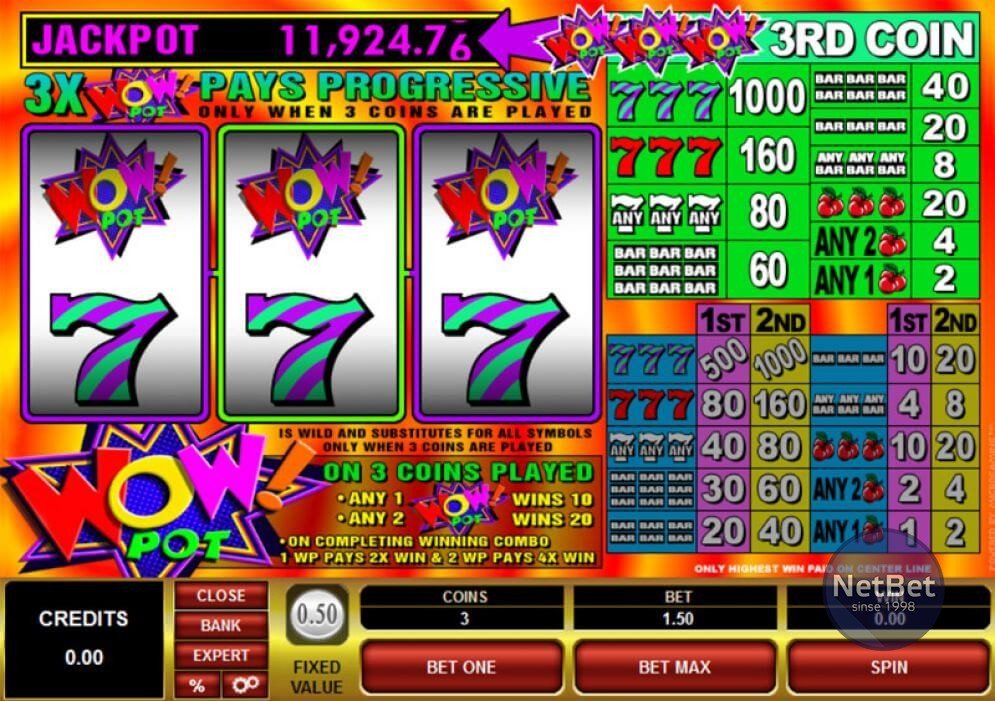 Some slots are built to dazzle, and to leave you in awe at their features, graphics, sounds and jackpots. WOW Pot isn’t one of them. In fact, if you’re looking for something that’s going to leave your head spinning, you’re probably better off looking elsewhere.

That doesn’t sound like the best introduction to a slot, but hear me out. WOW Pot is actually the name given to two different slots, both adhering to the same simple framework. While these games share their name, they also share a prize fund, with every spin contributing to a much larger prize – a classic progressive jackpot that is won on a very regular basis. Now I’m guessing that’s got you a little more interested…

Two Slots for the Price of One

The first version is the 3-reel version, a rudimentary slot that has only one payline. At the maximum bet, you’re in with a chance of winning the progressive prize, so you can compete for thousands from just 1.50 per spin.

The second version is known as the 5×3 reels version, with 15 paylines playable from 0.10 per line – again, up to the maximum of 1.50 per spin. Unlike the 3 reel version, with a base game jackpot of 1,000 coins, the 5 reel version offers up to 5,000 coins, alongside the chance to win the progressive jackpot.

The symbols and feel are reminiscent of old style fruit machines, and in that sense, there isn’t really too much of a visually encompassing theme to speak of. However, the main benefits of WOW Pot lie elsewhere.

Behind the theme, or rather lack of one, this is actually a very straightforward slots title – whichever version you’re playing. You won’t find too many bells and whistles on either the three reel or five reel version, and personally, there’s something refreshing about that – especially if you’re used to playing detailed, feature rich video slots.

Sometimes you just want to spin and win, with none of the added noise. That’s what WOW Pot delivers. But that certainly doesn’t mean you’re looking at a low paying slot. With the progressive jackpot constantly increasing with every single spin, prizes regularly run into the thousands – not bad for a low stake slot. And even in the base game, you can still win either 1,000 or 5,000 coins as the main jackpot, for the 3 reel and 5 reel versions of the game respectively.

The RTP is set at 89%, which to be honest is fairly low in comparison to other slots. Progressive slots are usually set at a smaller RTP because the prizes are so much bigger. But I’ve played some slots at 97%+, which is obviously much better value for money, even if they are much more intense to play.

Also, when you’re only playing for one payline, as in the 3 reels version, it doesn’t feel as bad as it might in a game with more paylines. So you won’t feel yourself going too long without winning combinations turning up.

Because this is an AWP-style slot, rather than a video style slot, you won’t find the usual selection of symbols on the reels. There aren’t any scatters in either version of the game, because there are no bonus rounds, and aside from the paying symbols like the Liberty bell, bars and lucky numbers 7s, there’s very little in terms of other symbols along the way.

The one exception is the WOW symbol, which acts like a traditional wild. When this appears across all of your reels, or across all reels on the 15th payline in the 5-reel version of the game. It triggers the progressive jackpot – and no doubt, a broad grin on your face.

In all other cases, it subs in place of missing symbols to complete paylines on any given spin, which comes at a 2x payout multiplier in the 5 reel version of WOW Pot.

There’s another nice combination – two wilds, plus the striped 7s, which will win you 2,000 coins, taking into account the 2x payout multiplier on the wilds. When you consider that’s effectively doubling the base game jackpot from the 3 reel version, all for the same maximum stake, it’s a decent prospect.

WOW Pot is a game that doesn’t rely on its graphics. That’s just as well, because to be honest, they look like something straight from 1985. The sound effects aren’t great either, and I’ve seen a lot better from Microgaming since. Of course, this is an original slot that has been around for a while, and it harks back to a bygone age of gaming – somewhat convincingly, whether intentional or not. If you’re looking for something that’s going to WOW you, as the name suggests, I’m not sure this is the slot for you.

But what this game lacks in finesse, it makes up for in prizes, and most potently in the progressive jackpot offering. It’s a low stake, fast-spinning game, but there’s still decent wins to be had, whether you’re on the three reel or five reel version of the game. Forget the RTP – it’s lowish, and you’ll certainly be able to find better elsewhere. This is all about the progressive jackpot, and people regularly win thousands and thousands of dollars when Lady Luck is smiling on them, all from a lowly max spin amount.

It’s nice to have a slot that just gets straight to the action, and WOW Pot does that well. With low risk, and an equal chance to win the progressive jackpot as anyone else paying 1.50 a spin, it’s definitely worth checking out WOW Pot slots if you haven’t done so already.