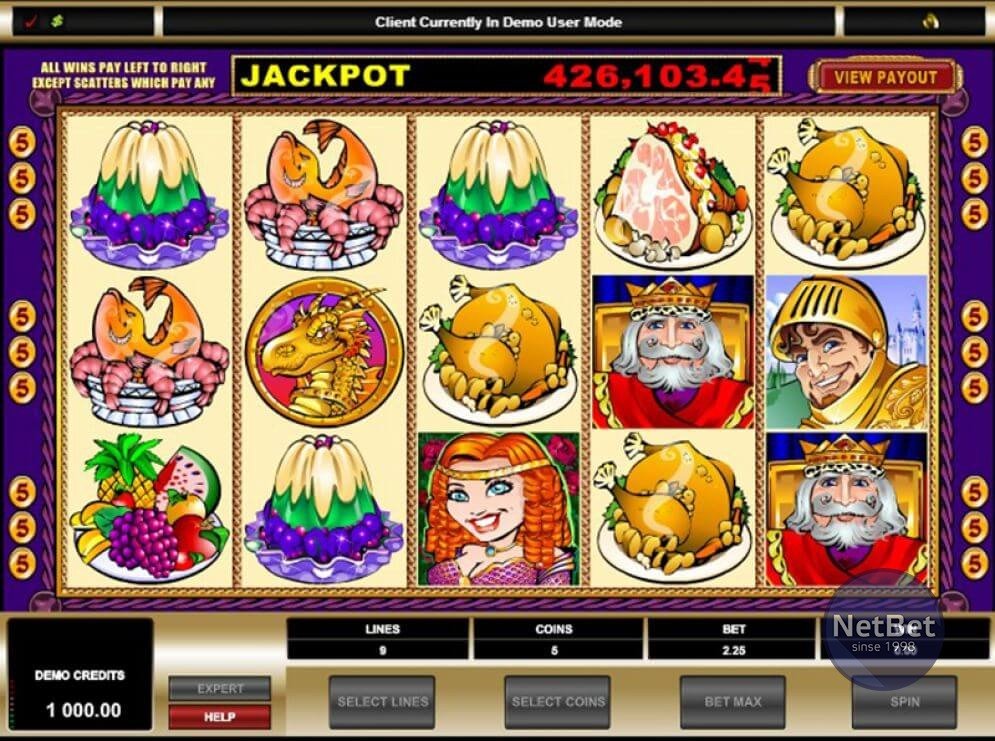 A King’s Ransom or Fools Gold?

If you’ve been around playing slots for as long as I have, nothing should come as a surprise, in terms of the themes and direction these games are going. I remember the old days when most slots were just an analogue of the AWP-style machines you find in arcades. Today, these types of games have been largely superseded by those with cooky themes and quirky designs. King Cashalot is no different.

This is a cartoon-style slot themed loosely on the story of King Arthur and Camelot. Of course, this King appears less concerned than Arthur about good and evil, truth and lies – instead, he’s more interested in cold, hard cash.

Behind the sketchy symbols, there’s a lot of money to be made in this Microgaming slot. With a decent in-game jackpot, and the advent of the continually rising progressive prize fund, there are plenty of reasons to take King Cashalot for a spin.

The game is set out across a standard 5 reels, with 9 active paylines in play at any one time. It is a deceptively simple game, without the usual bells and whistles you’ve come to expect from modern video slots games.

There is a high max bet to be eligible for the jackpot, but if you do land it, you’ll feel like a King yourself. There’s up to 1500x available in the base game, while the progressive jackpot is naturally much larger – and always increasing in size.

This colourful, vaguely medieval themed slot comes recommended for anyone who cares more about prizes than design. While the royal symbols and the banquet-style meal symbols reflect the luxury of the royal court, the jury’s still out when it comes to realism.

For me, King Cashalot is well drawn, well designed and a great way to spin and win – especially if you’re prepared to go a little bigger on your per spin bets. But before you rush off to try your luck, let’s look at the key symbols and their features that you will encounter along the way.

The King, presumably King Cashalot himself, is the wild symbol here, substituting in place of any missing symbols on your payline to make it pay. This is a useful symbol to find in terms of completing paylines, but he won’t have this effect with any of the other special symbols.

You’ll also come across The Jester, who is the scatter symbol in the game, and responsible for paying you an enhanced scatter win whenever multiple of these symbols appear on your reels.

There’s also the Dragon, known as the Treasure symbol. This pops up from time to time, and is effectively the bonus symbol – but don’t expect any fancy bonus rounds or anything like that.

Instead, it’s a straightforward pick from 8 treasure chests – you have 3 picks to settle on an amount. You can stop after your first pick if you’re happy with the prize, or play on to the next pick.

But whatever happens by your third pick, you keep the prize you’ve discovered. This is a good test of your nerve – do you dare go all the way in the bonus round, and end up with a smaller amount? Or, if the gambling gods are smiling, it might just pay off with an even bigger return.

Bets & Jackpots Fit For A King

The jackpot at 1500x is triggered by landing 5 of the King wilds on the 9th payline. By definition, you need to play across all 9 paylines in order to compete for the jackpot prize.

The bet range is from £0.05 right up to £225 per spin, so there’s room for someone on any budget to play this game. And when you factor in the 1500x return, you could be looking at wins of up to £337,500. And that’s before you start to factor in the progressive jackpot.

The one main reservation I have here is the 91% RTP. It’s not exactly a bad rate, but for me, I tend to prefer games with a slimmer house edge.

My recommendation for King Cashalot is that you should play it, and with maximum stakes, but just don’t hang around too long. If you were to play this game consistently over a number of years, the odds aren’t in your favour. However, I’ve personally seen some big wins from this slot, so it definitely can be done.

Our Verdict on King Cashalot

Whether you’re playing on mobile or on a desktop version, this remains a classic Microgaming slot. It’s not the most flashy game you’ll come across, and nor does it have the sheer level of jackpots that other progressive slots from Microgaming enjoy.

However, what it does have is enough to convince me to stop by every now and again, and as I said, this is a game that’s always been pretty good to me.

For what it’s worth, I recommend playing this game hard, with maximum paylines in play and the maximum bet per stake. That way, if it does pay off and the reels land in your favour – particularly for the jackpot – you can walk away a hell of a lot richer than you started.

King Cashalot isn’t my favourite Microgaming slot, but I understand why it’s popular, and recommend it to other players as a great spin with plenty of winning potential. Check it out for yourself to see what I mean – it’s unlikely you’ll regret messing with this cash-laden King.