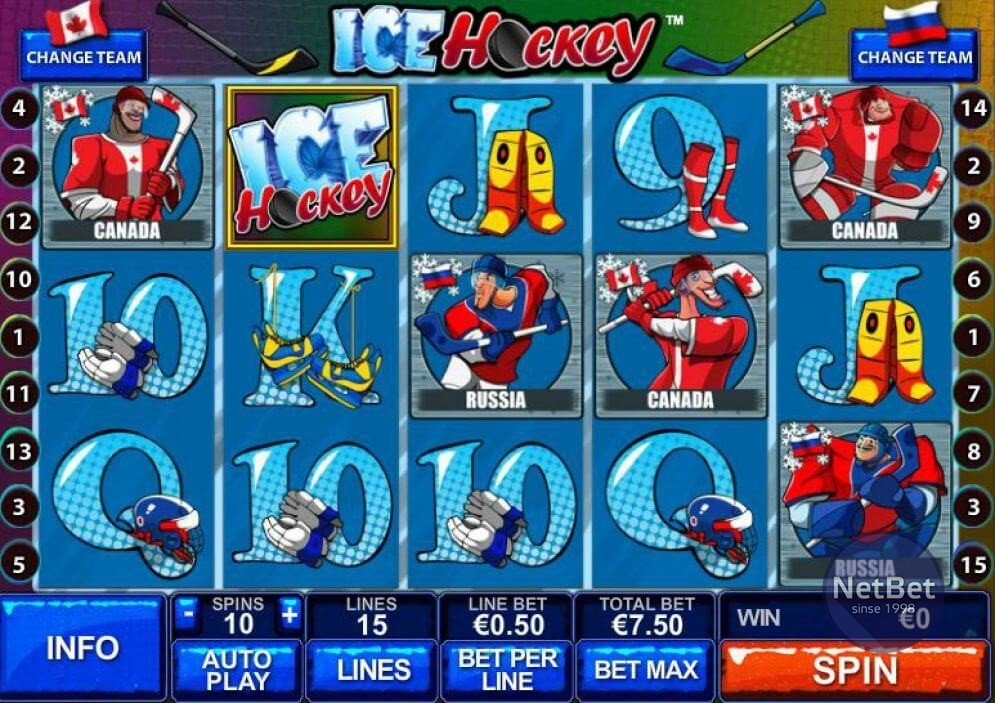 Do you know that the first hockey players used a frozen patty of cow poop as a puck? Everything has changed nowadays. Today this fast-paced game attracts millions. Many like to watch NHL games and root for their teams during the World Cup or Olympic Games. Many enjoy hockey playing video games or slot games in their favourite casinos. There are a good number of hockey-themed online slot machines and one of them is Ice Hockey slot. This video playtech slots with the hockey theme gives you a perfect opportunity to feel part of your favourite team, play hockey and win some money.

What is special about Ice Hockey slot game?

This online game has an interesting feature. Before starting to play you must choose the countries that will play first. The combinations with hockey players from one team pay left to right and hockey players from the other team pay right to left. Moreover you can change teams in the course of the game. The graphics is funny. You will see amusing hockey players and hear the sounds of a hockey match.

Symbols are Gate, Ice Hockey logo, Puck, Hockey players, Free Games and cards from Ace to 9. They form 54 winning combinations. Mixed combinations from one team pay left to right and from the second one from right to left in the main game. During free spins they pay in both directions.

Symbols to look forward to

Wild: Gate substitutes for other symbols on the reels except the scatter, Free Games, Puck and mixed pay combinations. Five wilds on any active payline pay the top line jackpot of 10,000 coins.

Free Games: there are two different free games symbols – one is on the first team flag and the other is on the second team flag. A Free Game symbol of a single team anywhere on reels 1 and 5 at the same time start 12 Free Spins. Only players from the triggering team will appear during the feature. The good thing is that all symbols pay left to right and vice versa. The obvious minus is that you can’t re-trigger free spins infinitely. Puck and Free Games Symbols do not appear during this feature.

Pass the Puck Bonus: the Puck on reel 2 and a player from the left side team on its immediate left or the ball on reel 4 and a player from the right side team on its immediate right trigger the Pass the Puck bonus game. In the bonus game you will hit the puck which will pass between all the players on the reels starting with the nearest one and will pay a tripled bet for every hockey player who will touch the puck. This feature can’t be triggered in free spins.

Mixed Pay: when 3 or more different players of one team appear on a payline they give payouts as well. During free games mixed combination pay in both directions while in the main game the first team pay left to right and the second team pay right to left. The wild symbol doesn’t help in mixed combinations.

Bet: to play the game you must make a wager. This slot welcomes both low rollers and high rollers, the bet varies from $0.01 to $1 per line. The game offers a top fixed line jackpot of 10,000 coins for 5 Gates on any active payline. There is also the STOP feature, so you can stop reels whenever you want.

Overall, the Ice Hockey is a pleasant slot to gamble online. There are not too many features, but the game is quite easy to make your way through.

You can compare this Playtech slot with Break Away Microgaming online machine.