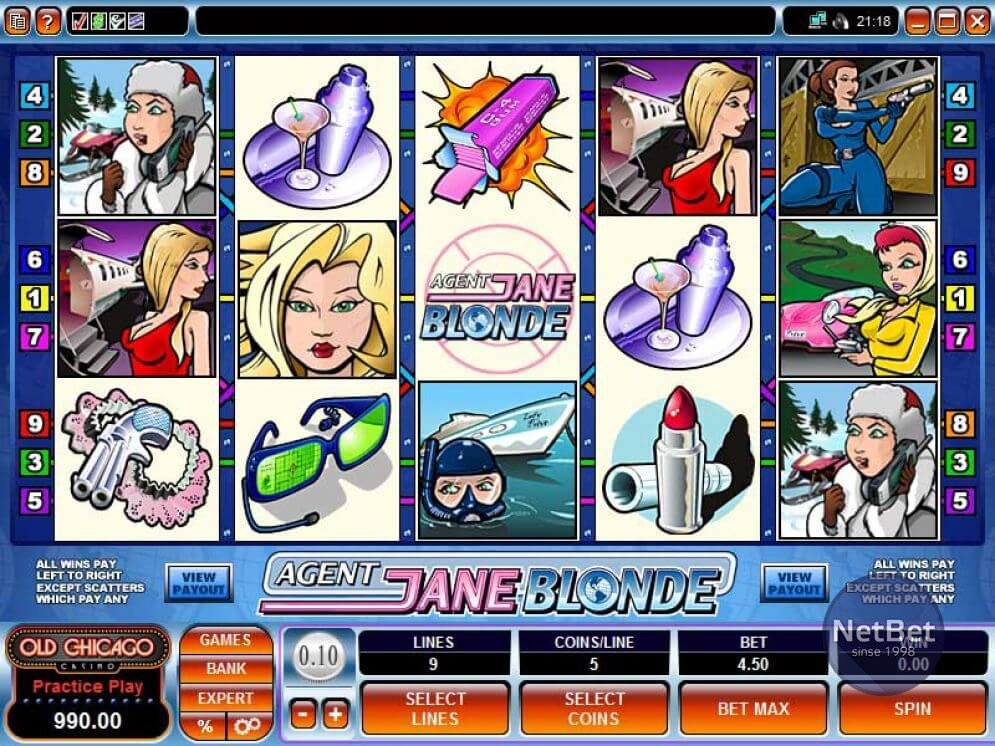 Unless you’ve spent your whole life living under a rock, you’re probably familiar with James Bond. The suave, sophisticated spy who happens to be a master in both bare knuckle combat and international diplomacy, the Bond books and films have created a tangible cultural icon from this fictional secret service agent.

As Daniel Craig prepares to step away from his role as Bond on the big screen, tongues are wagging as to who could replace him. Some have even suggested a female Bond could be long overdue. Step forward Agent Jane Blonde, a clear parody on Bond himself, and the theme behind the slot of the same name from Microgaming.

Agent Jane Blonde is a cartoon-styled slot, and is clearly a tongue in cheek take-off of the original super-spy himself. The reels are adorned with symbols of Agent Blonde in various poses, including in-cognito, as she attempts to fly beneath the radar of her enemies.

Exploding bubblegum, lipstick bullets and floral guns compete for space among Agent Blonde in her various different disguises, helping keep the graphics interesting, while carrying the theme well throughout the game.

I like in particular how the game developers have fully embraced the theme – you won’t find the usual high card symbols, which always feel a little awkward to me anyway.

Behind the scenes, this is pretty much another clone of the hugely popular Thunderstruck II, in terms of the gameplay and features you’ll find within this game.

Agent Blonde is a 5-reel slot with 9 paylines, and a total in-game jackpot running at 750x. I’ve found this game to be pretty good, even if it’s lacking some of the bells and whistles you’ll find with more modern, blockbuster games from Microgaming.

That being said, it’s still a very well-made game, with plenty of opportunities to bolster your bankroll. But what are the key symbols you need to be aware of as you spin through Agent Blonde, and what should you make of the bets and corresponding jackpots on offer?

Important Symbols in Agent Jane Blonde: A License To Thrill

The Agent Jane Blonde logo is the game’s scatter symbol, and your ticket to some juicy free spin bonuses. You need to land three or more of this symbol anywhere on your reels to trigger the bonus feature. All wins are tripled when the scatter bonus is in play, so it can be worth anywhere up to 15 free spins + 3x multiplier when this bonus feature is active – a great way to beef up your wins and walk away with a nicer prize for your efforts.

The game’s wild symbol is the portrait of Jane Blonde herself. Not only does she replace any mission symbols to complete your payline, but you’ll also do so at a 2x multiple. When both of these features are used in conjunction with each other, it can be a great way to strengthen your wins and walk away with some higher value spins in the process.

There’s also a gamble feature that you can choose to use, or not, after the conclusion of each winning spin. If you want to gamble, you’ll be confronted with a choice – predict the next card, either red or black, and its suit. If you guess the colour correctly, you’ll double your win. If you get both correct, the gamble will pay out at 4x. But if you put a foot wrong, your winnings are lost.

This isn’t a progressive game, so there’s no super-huge jackpot looming. However, you can still win up to 10,000x from the main game, which is pretty generous at an RTP of 96%.

You need to find 5 Jane Blonde wildson your reels to walk away with the jackpot, not exactly an easy feat but well within reach if you play this game enough. The scatter symbols also pay out an additional bonus of their own, up to 500x for finding five of them on the reels at any one time.

Bets on this game range from £0.05 to £90, so there’s room for players right across the budget range. Of course, the amount you bet will determine the size of your eventual winnings, and when you’re chasing the 10,000x jackpot, we recommend ramping up your spin value as high as you can go.

That way, you’ll really feel the difference if you do land one of the bigger prizes on offer.

Agent Jane Blonde plays a lot like many slots from Microgaming, and is particularly familiar to fans to Thunderstruck II. With Microgaming, when they stumble on a winning formula, they tend to make the most of it.

That’s why we’ve seen a number of copycat games of Thunderstruck II, of which Agent Jane Blonde is perhaps one of the most standout examples.

I like the RTP here, at 96%, and I enjoy the multipliers, free spins and even the gamble feature they’ve built into the game. Personally, I’ve had both ups and downs from the gamble feature so I’m not convinced it’s worth your while, but it’s a nice feature to have I guess if you’re feeling lucky.

The game is reasonably dated now, and you can find yourself going through dry spells that seem to last forever. However, when Jane wants to play ball, you can similarly find yourself winning and winning – especially once those free spins and multipliers start racking up.

All in all, this is an enjoyable game that continues to stand the test of time. While there aren’t too many surprises here, the theme is intriguing enough, and the game overall is well-executed. I would recommend you check out Agent Jane Blonde for yourself – you might even win some decent money in the process.