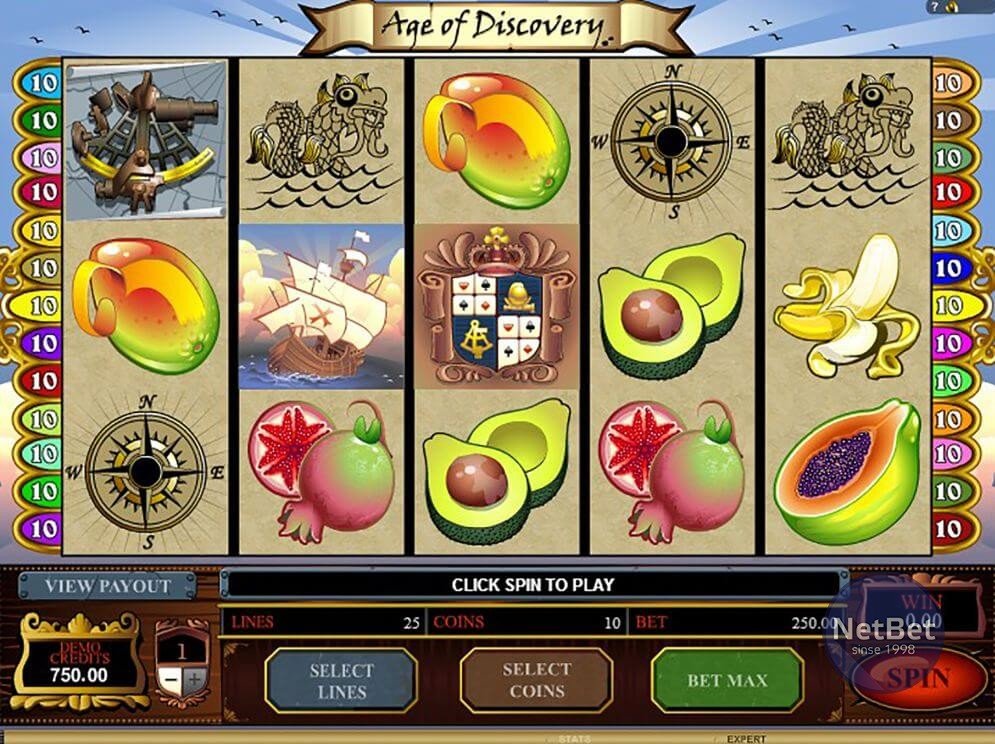 Voyage to the New World in the Age of Discovery

The Age of Discovery saw intrepid explorers venture across the high seas, in search of the New World. This instrumental period in world history spanned from the 15th to the 18th centuries, and were responsible for a number of cultural, social and political shifts globally.

These brave adventurers set sail to fill their vessels with exotic goods and delicacies for their King or Queen. Those lucky enough to make it back alive were handsomely rewarded for their efforts. And in the process, they helped shape Western civilisation’s early understanding of the world.

Today, you don’t need to find your sea legs to explore new lands. Instead, you can just play Age of Discovery, a slot from maek leading developer Microgaming. The game is themed around the exotic fruits and delicacies that were uncovered on ventures across the high seas, with a stylised visual reminiscent of 16th century maps and navigation.

Behind the scenes, it’s a five reel, 25 payline slot with a generous RTP. And when you consider there is 6000x to be won on the in-game jackpot, it can be a decent money spinner.

I’ve played Age of Discovery on and off for a while, and there’s enough intrigue to keep me coming back for more. The treasure bonus in the game in particular has been kind to me, and I’ve found it to pay out regularly, and in decent amounts too, especially from the bonus rounds.

On the downside, the game has a slightly retro feel, especially when compared to other Microgaming games – unusual, considering it’s not actually that old.

There aren’t too many bonus rounds and you won’t find any free spins, so if that’s the kind of thing you’re looking for, you are maybe better off trying another Microgaming slot. However, if you’re just interested in winning money from your spins, you’ll probably appreciate the double scatters and the instant cash bonuses you can pick up along the way.

Age of Discovery is well worth a spin, and if you enjoy nautical and historical themes as much as I do, you might find this game right up your street. But what are the critical symbols you need to be aware of, and how can they help you win jackpots at both the minimum and maximum bet sizes?

There are two separate scatter symbols you’ll probably come across as you’re playing Age of Discovery. The first is a strange looking sea-dragon, who has a faintly oriental styling to his graphic. Three or more of these dragons will pay a scatter bonus, while acting as a multiple for your staked amount – with up to 80x available for five of these scatters. They don’t trigger any additional bonus round – instead, that is reserved for the second scatter symbol, the compass.

Three, four or five of these compass symbols on your reels triggers the treasure bonus, which is arguably where most of the action is to be found in Age of Discovery. Here you’re taken to a second screen where there’s the chance to win up to 32,250 coins. It’s a pretty basic feature unfortunately, but there’s some decent wins to be had as a result of it.

The gold coin is the wild symbol, which helps complete paylines by forming whatever other symbol you need to pay out. It doesn’t sub for the scatter or bonus symbols, but anything else will work like a treat. And if you see five of these symbols, that’s an instant win of 6000x for your troubles.

The jackpot available in the game is 6000x, which is decent enough. It could be higher, but there’s no progressive jackpot element, so this is the best the game can possibly do. As mentioned above, it’s five wilds that lead to this jackpot being paid out, so it’s that you want to focus on if you’re looking for a big win.

Age of Discovery: The Verdict

This game really captures the essence of seafaring and navigation, and it’s theme takes you back in time to get a sense of what it might have felt like to be on those early ships. OK, so you’re not exactly suspending your belief when you’re playing video slots, but it’s a convincing theme that works well for the game.

Other than that, you won’t find this the most innovative Microgaming slot out there. Where it does shine through is in its RTP of 96.62%, huge by comparison to some other slots, and its propensity to pay out decent amounts on a semi-regular basis. It would be nice if there were some free spins on offer here, or some additional scatter bonuses, but I suppose this is just a simple game that does what it says on the tin – without any of the fancy stuff.

Do I recommend Age of Discovery? Yes, it’s well worth playing for yourself, and you might even win something decent, given the high RTP. For me, the jackpot could be higher, but you can’t have everything you want all the time.

Definitely check it out, especially if you enjoy slots with a vaguely historical theme – you might even enter an Age of Discovery all of your own.