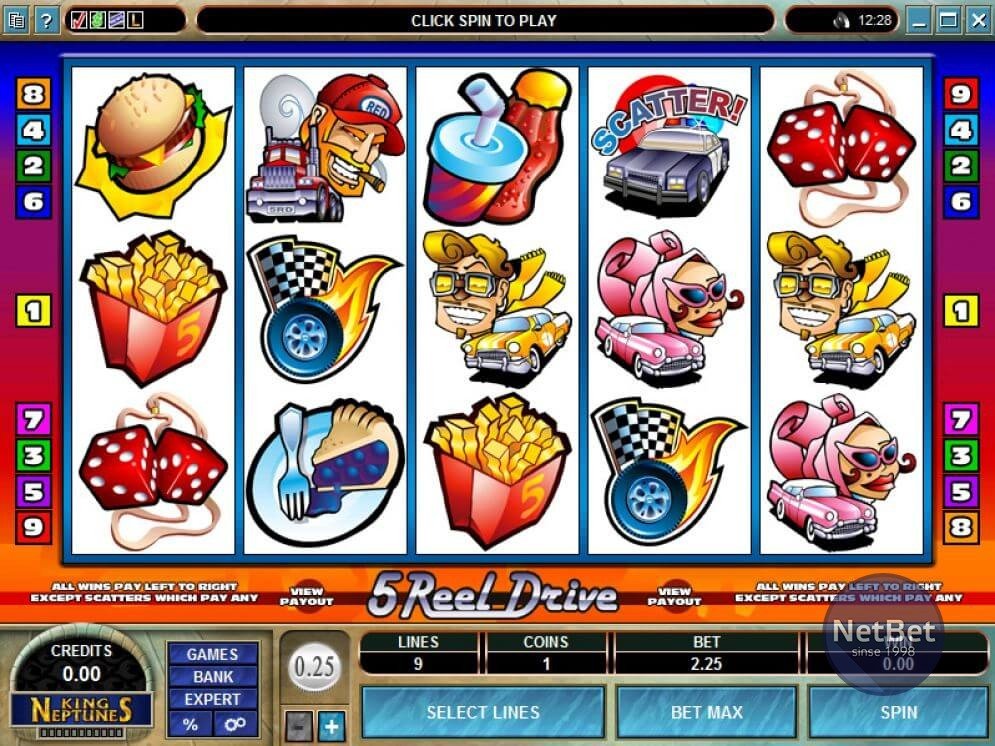 Picture the scene. You’re at the starting line, engines revving. The checkered flag is waved by some hot but impartial female, perhaps the prize for the first one over the line. OK, so 5 Reel Drive doesn’t quite carry the same glamour, but it’s essentially a slot that racing and motoring fans will love.

If racing doesn’t quite float your boat, maybe you’re more into trucking? 5 Reel Drive from Microgaming is an unusual blend of themes from both the racetrack and the trucking lifestyle, providing the backdrop to this classic 5 reel slot game.

First launched back in 1999, it’s come a long way. A mobile version released in September 2013 gave the game something of an overhaul for mobile players, but by and large the format and the graphics have stayed the same since the very early days of the online gambling industry.

The slots action on offer may be fairly basic, but there’s plenty to keep you excited. The RTP of 96.65% is amongst the highest tier of slots I’ve ever played, and from personal experience, I can tell you this translates into decent, regular wins.

The game itself is fairly standard, and you’ve probably played games with many more features, better graphics, and a more modern soundtrack. But that doesn’t detract from the playability of this game at all, and I’m sure those that have walked away with the jackpot of 10,000 coins won’t be complaining.

Aside from the standard 5-reel, 9-payline game, there’s also a 5 Reel Drive version of Mega Moolah – perfect for those who prefer their jackpots to be firmly ‘progressive’. This is the difference between buying a nice holiday with your winnings, and buying a mansion. Land one of these progressive jackpots, and your life will be changed instantly for the better.

5 Reel Drive isn’t exactly what I’d call ‘cutting edge’ – but people still play for the retro factor, and for the decent wins along the way. So what symbols should you look out for when you’re chasing these wins, and what’s the deal when it comes to minimum bets and jackpot wins?

The wild symbol is the road sign, which seems to denote a winding road ahead. When you see this yellow sign appearing on your reels, you’ll know it’s there to give you a helping hand towards your payline. As normal, it doesn’t substitute for the scatter symbol at all, but anything else is fair game.

The burning tires are the jackpot symbol, and you’ll need to see five of these on any active payline if you want to win the main game jackpot of 10,000 coins.

When you consider the RTP is an impressive 96.95%, you shouldn’t find it too difficult to land this as compared to other games, while you should certainly be able to win decent, smaller amount much more regularly.

The scatter symbol is the police car, which makes sense. When you turn these up on your reels anywhere, irrespective of paylines, you can receive a scatter bonus, depending on whether you’ve found 3, 4 or 5 of these symbols across your reels.

Other than that, the highest paying normal value symbol is the checkered flag/burning tyre, followed by the cheery-looking trucker.

Bets and Jackpots To Get Your Engine’s Racing

The bet per spin ranges from £2.25 up to £90 for those with deeper pockets. Based on the 10,000x maximum win, this can be worth a decent return if you land the jackpot. Also, don’t forget about the 5 Reel Drive version of Mega Moolah, where you can compete for the progressive jackpots – particularly if you’ve got an appetite for the bigger prize.

The screeching tyres and checkered flag are the main jackpot symbol, and it’s five of these that will lead you to the maximum payout. Even if you fall short on that, there are still some decent wins available from other combinations, like 1000x for five truckers, and 900x for five taxi drivers, respectively.

If you came here looking for a dazzling example of Microgaming’s best work, you might be disappointed by what 5 Reel Drive has to offer. Behind the motoring theme and the colourful graphics, the game is pretty basic, and there are no bonus rounds as such to keep the action fresh. There is no free spins game, and the scatters could do more to help you on your way.

Having said that, the RTP is pretty generous, and there are decent wins available for lining up the screeching tyre symbol, at 10,000 coins.

If simplicity is your thing, you’ll probably get on alright with this game, plus you’ll be standing in good stead when it comes to decent wins. But for some players, I can imagine them getting bored of this game quite quickly.

I recommend you definitely take this game for a test drive – it could even be worth a few quid. Just don’t set your sights on playing this game all day. Life is short, and slots games are plentiful. While this clearly earns its place as a Microgaming slots favourite, it’s by no means the best game from them I’ve seen. Just try it out for yourself and I’m sure you’ll get where I’m coming from.